We know Hollywood is not immune to expressions of violence. We see headlines of behavior on and off screen that speak to our culture’s systemic issues of sexual assault and domestic violence. To the former: yes, art is subjective and is a reflection of our culture. And to that end, we have seen it become increasingly popular to question assaults in media — both the why (is it for shock value or part of a well-treated character arc) and the how (graphic or implied).

So it’s no surprise that at one of the biggest events of the year in popular media and culture, we see such blatant displays of sexism and violence — mixed with complicated expressions of racism and ableism, a problematic intersectional stew.

First, let’s unpack sexual harrassment: Early in the night, Regina Hall stated that she is single and looking, followed by inviting some of her fellow actors to the stage and patting them down while she made comments about how they were “feeling good”.

There is a historic assumption that men cannot be assaulted by women. But we know this to be absolutely untrue, and harmful to survivors of sexual and domestic violence. Especially those who are male identified and those who have been harmed by women. Making a joke of harassment because it is done by a woman is problematic and leads to silencing survivors.

And remember, these are actors attending a work event with their colleagues. Everyone deserves a workplace where they are not subjected to joke harassment.

Now, let’s discuss violent speech and behavior: During his presentation preamble, Rock made a (bad) joke at the expense of Jada Pinkett Smith. Here’s the thing — Making light of someone’s autoimmune disorder, a condition of which they have been public about their struggles, is not okay. Adding this to the reality of how Black women’s hair is policed by society at large, Rock’s “joke” definitely crossed a line.

We’ve all been in that place. Someone makes a “joke” — about us, about someone we love, about our identity, or the identity about those we care about. It’s definitely not funny. It might make you feel uncomfortable. It might be harmful. It might be hateful. The hurt might be intentional or not. And we are left wondering how to respond to it.

We all want to keep the people we care for safe. And Black women especially deserve to be protected in our society in which they grapple with the impact of the intersection of racism and sexism on a daily basis. Sunday night, Will Smith made a choice to defend the comments made about his wife with physical violence. And his response: “Love makes you do crazy things”.

But, watching the scene play out, it was clear that Smith was very much in control, not acting “crazy” at all. Moments after being filmed laughing, he walked up to Chris Rock, slapped him once, and calmly walked to his table and sat down. What we know from our efforts to eradicate domestic violence is that it is not about a loss of control — in fact, it is about exerting control. Smith’s calm demeanor while perpetrating physical violence followed by tears, excuses, and apologies (to the room and the academy, not Chris Rock) feel eerily familiar to those of us who do this work.

Add to all of that the stereotype of the angry black man and we have a complicated message that requires a nuanced understanding of what is right and what is wrong. Is protection — ideally intervening in an act before it happens — the same as using violence as a consequence?

Let’s think about all of this for a moment: Now, you might be saying, “it was just a joke” or “I am sure the guys loved the attention” or “isn’t it desirable to have a partner who will defend you when someone attacks you?”

We invite you to ask the questions:

And we invite you to imagine:

How might this have changed your reaction to these situations?

We all make choices about our behavior — and it is to those choices that we should be held to account. Regina Hall chose to grope her colleagues for laughs. Chris Rock chose to make a joke grounded in misogynoir. Will Smith chose to participate in physical violence.

And people are watching.

Moments after Smith struck Rock, his son tweeted “That’s how we do it”, ostensibly supporting his father’s choice of violence. The internet is awash with conversation and argument, with people voicing their support or condemnation of Rock’s joke and Smith’s response. Unsurprisingly, there are few comments about Regina Hall’s nonconsensual pat downs.

What are we teaching our community when we condone sexism, laugh at misogynoir, celebrate harassment, or choose violence? What would our world be like if we were holding one another accountable to behaviors that promoted the safety, dignity, and respect of all people?

At Safe Passage, we believe that violence in any form is not an acceptable choice and does not serve any helpful purpose and each of us have a role in changing the culture that allows, encourages, and amplifies violence.

Want to learn how to interrupt violent language or behavior in your everyday lives? That is what we teach in our Say Something Prevention LABs. Learn how to respond effectively to inappropriate jokes and behavior to help create safety for the people you care about (and everyone else in our community!). Say Something helps you increase your skills to: 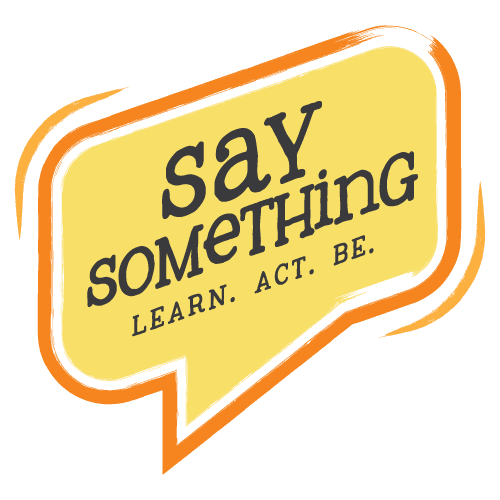 Join our growing community of people working to interrupt violence together to create safety for all. Learn more at www.saysomethingnow.org.