My first Hot Chocolate Run for Safe Passage was a walk.

It was a walk with one kid in a stroller, another reluctantly walking. And snacks, lots of snacks. We were all bundled up, surrounded by a crowd, wondering whether we’d make it the two miles (we would, we knew we would, but small kids mean all travel is harder).

I was in it for different reasons than our young kids. They were lured by the promise of hot chocolate. I signed up because I think I understood this wasn’t simply another fundraising race or walk, even like ones for Good Causes. This event did something very special. It took a stigmatized experience — enduring domestic violence and reaching out for help — and got loud. It got thousands of people, brass band, pop music, roaming-penguin-and-polar-bear-suited loud.

The message was that all families deserve to be safe families. The message was when families aren’t safe, that isn’t because the people being hurt have done anything wrong. Domestic violence shouldn’t be a cause for shame.

Here were thousands of feet — and stroller wheels — intent to move domestic violence from the shadows and into the cold, December light. As we walked, buoyed by music and cheers and bells, I imagined the work Safe Passage does by hosting this event was a way to let all these feet and voices support survivors. We were doing this with our presence, obviously. We did this because the signature event — a 5K road race and fun run, a 2-mile walk—raised hundreds of thousands of dollars for the organization.

One of the programs Safe Passage has been able to fund because of its Hot Chocolate Fund proceeds, I later learned, is Say Something. This program helps people become better and more effective bystanders and advocates for safer and more effective ways for people to communicate with one another, which means opportunities for escalating-into-violence situations become far less likely. Think of this as something as relatable as how to intervene when one’s obnoxious uncle makes ethnic slurs at a holiday table. This program, which has recently been piloted for high school students, is just one of many initiatives the organization has been able to make due to its strong community support.

There are ample opportunities to become involved with Safe Passage.

As years have elapsed, our family long ago traded in strollers for children who have all grown taller than me. My daughter and I have run the 5K together — and now, better, she runs with friends and I run on my own amongst a crowd and then meet her at the end. Then, and now, the hot chocolate is her biggest draw. She’s begun to be a pretty good fundraiser, too. She knows why; she wants people to be safe.

What’s amazing and important to me is that she’s never imagined domestic violence as a taboo issue. It’s this that keeps me participating each year. I often walk around town later in the day, after the race is over, and note the stickers, which fell off people’s backs, reading messages about supporting safety and security for everyone. How incredible to live in a community, which has taken this issue as its own. After so many Hot Chocolate Runs, our mug collection is pretty impressive.

But our commitment is even more breathtaking. 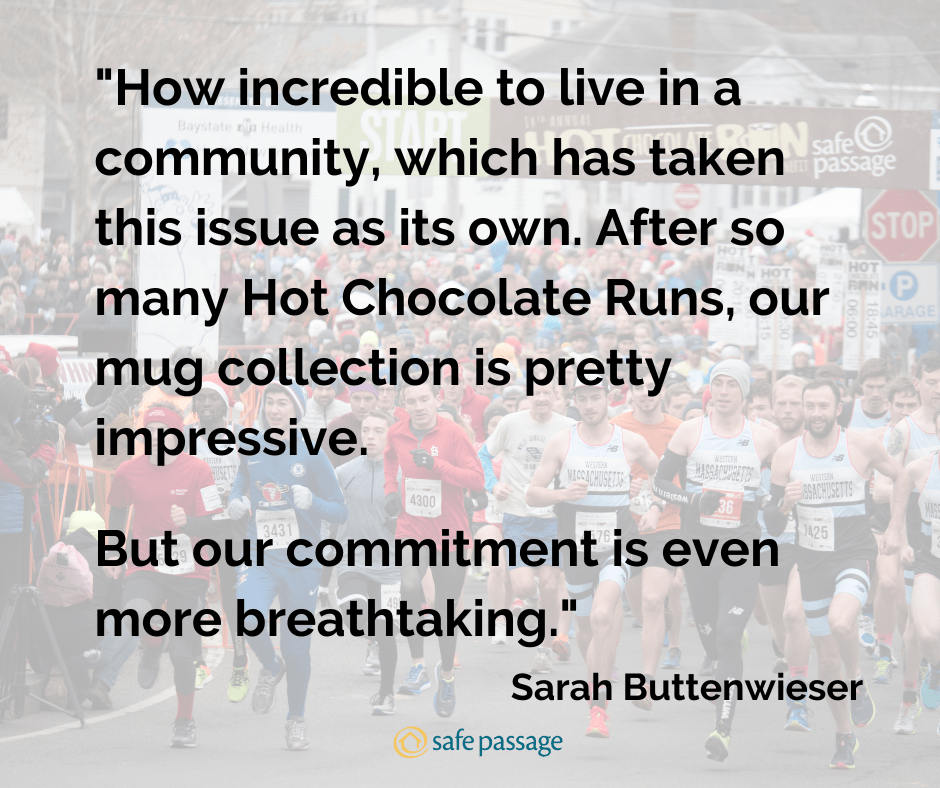 Sarah Butttenwieser is a writer, walker, and surprised-to-again-be runner, who lives in Northampton.